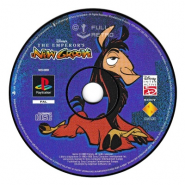 Disney's The Emperor's New Groove - While preparing the young emperor for the future celebration of his own birthday, he decides to build a huge water park, but his personal adviser prevented him and turned him into an ordinary lama. Cuzco is going to go pick up the stolen state and find its true form by solving various puzzles, passing through cleverly placed traps and ancient caches. Collect collected coins, elixir of power, grapes and other useful items that will temporarily improve the condition of the lama and her abilities.

Comments to Disney's The Emperor's New Groove on PS