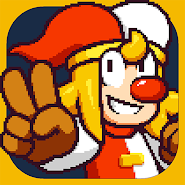 Tightrope Theatre - As one of the regular clowns who give performances only in circuses, the clown Chester dreams of one day becoming famous all over the world and becoming fabulously rich with the help of his own celebrity. Survive as many difficult events on the tightrope as possible, at the same time getting behind the wheel of a cleat and preparing for a seriously dangerous performance. More than 100 levels are filled with mazes, spikes, bombs, cannons, trampolines and even objects appearing out of nowhere through certain free spaces on each of the received locations.

Comments to Tightrope Theatre on Android