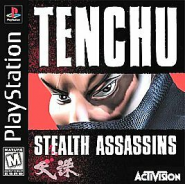 Tenchu: Stealth Assassins - In the 16th century, martial arts were very popular in Japan, which turned people into true ninjas, such as Rikimaru and Ayame. These 2 main characters have been trained since childhood with special abilities to kill silently in the future. In their possessions there is a harpoon with a rope, smoke grenades, asterisks, shurikens and other dangerous weapons, so any enemy can be afraid of a collision with them in advance. Your task will be to protect the host by defeating all enemies in 10 different missions. Take advantage of your own invisibility, speed and surprise.