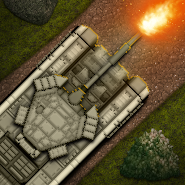 & lt;p & gt;Tanks Defense-Tanks in Defense (TD) - Take the old mechanisms as a basis, turn them into modern technologies for creating various tanks and defend yourself from constant waves of rivals. Build a strong army from a large number of tanks or create a few that are the best. Generate new ideas to turn them into reality, play against friends or random players from all over the world, regularly do tests on certain models and use additional equipment in an emergency. The most important thing is to prevent the enemy from reaching the base.