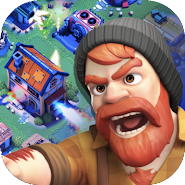 Survival City Zombie Base Build and Defend - multiplayer online strategy, which the unfolding events in the fictional universe from the attack of monsters and now you along with other players will try to survive in such a dangerous world. The developers decided to diversify the gameplay and add to the game mechanics of the strategy elements of defense towers. Beautifully crafted world is made in colorful graphics perfectly captures the overall atmosphere of the game.

Similar on Survival City Zombie Base Build and Defend

Comments to Survival City Zombie Base Build and Defend on Android