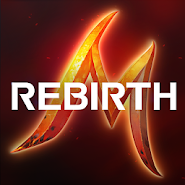 RebirthM - colorful RPG from the “Carbet Games” opens up the world of battles in real time in PvP. There are several extensive modes, such as Guild and Raid Boss. "RebirhM" features sharp and detailed graphics, in a dark dull background and a realistic soundtrack with the voice of all the action. There are several servers and tier ranking, adds a competitive motive. You can play both alone and with friends: the entrance to a public or private server through the access code.

Comments to RebirthM on Android