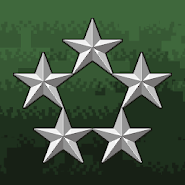 Kychki cultivation - Get an honorary military rank by participating in real battles, where there is no time for relaxation at all! Raise your own morale and go to conquer the peaks, getting gold in battles for destroying enemy planes, fighters, tanks, ships. To increase your rank, you need to combine the insignia, to do this, simply move one of the signs to an identical one. Starting with the rank of Private and reaching the General, you will see for yourself how many quests had to be completed to increase the rank.