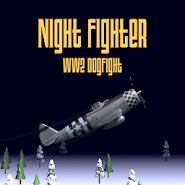 Night Fighter: WW2 Dogfight – a game on Android where you take part in the battles of the Second world war. In the game you will control fighters and fight the enemy for air superiority. Take control of one of the 15 fighters in the game and challenge friends and other players from around the world. Every plane in the game has its own unique characteristics and features, which have been reproduced on the basis of historical facts. The aircraft represented in the game: