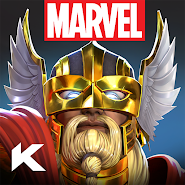 Create your absolute champion of Marvel, choosing the right weapons and gear, and team up with your friends in intense battles in real time. Take part in epic war on a planetary scale and go from ordinary to legendary hero of the PLANET BATTLE. Marvel: World Champions is the only game in the Marvel universe where you can become your favorite champion and change it to reflect your preferences and choose your fighting style. Get your gear and improve in the battles, full of insane destruction. Gear and weapons will increase the power of your champion and improve his abilities. Learn the history of the Planet battle, full of mystery, intrigue and fierce battles featuring iconic Marvel characters. Lead your team to victory — strategize to choose the right combination of the three Champions and crush all opponents in brutal team fights.

Cache for Marvel: Мир чемпионов: unzip the folder to /Android/obb/
- path will look like this: /Android/obb/com.kabam.realm/
- install apk, launch the game!

Cache for Marvel: Мир чемпионов: unzip the folder to /Android/obb/
- path will look like this: /Android/obb/com.kabam.realm/
- install apk, launch the game!

Similar on MARVEL Realm of Champions

Comments to MARVEL Realm of Champions on Android