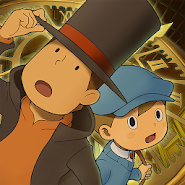 Explore the world of Professor Layton is an extraordinary London future - and solve the puzzle with one tap of a finger. After solving the many interesting riddles famous archaeologist Professor Layton receives a rather peculiar letter. The sender of this email is none other than his assistant Luke ... but after 10 years in the future! "Future Luke" found himself in a quandary. The London he knows and loves, was in absolute chaos. At first, thinking that Luke was just joking, the Professor can not remember the terrible events that occurred last week - then took place the opening ceremony of the first time machine of humanity, which was attended by many prominent figures from all over the country. However, in the midst of the demonstration of the time machine went haywire and covered the audience with a terrible explosion. Several of those present mysteriously vanished into thin air, including Prime Minister bill hawks. Can't shake the feeling that the explosion of a time machine may be somehow linked, Professor Layton and Luke went to the place mentioned in the letter to the store hours on Midland road in Baldwin, opening, perhaps the great secret with which they have ever faced. 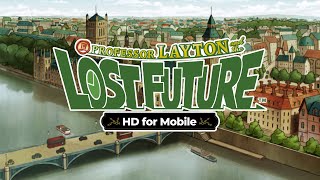 Cache for Layton: Lost Future in HD: unzip the folder to /Android/obb/
- path will look like this: /Android/obb/com.Level5.LT3REU/
- install apk, launch the game!

Comments to Layton: Lost Future in HD on Android