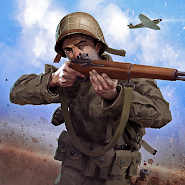 You find yourself in an alternate reality where the Second World War led to terrible consequences. Not many of those who survived are now forced to hide in an underground bunker and fight for the remnants of resources and food. You have to lead and develop one of the bunkers in which you will train your squad of soldiers. In the bunker you will be able to make the necessary weapons, ammunition, train soldiers for battles. And there is someone to fight with, because not only you survived. Exploring the post-apocalyptic world, fight with enemy squads and, freeing prisoners, increase the number of your squad. The more people there are, the more chances there are to survive in this world.