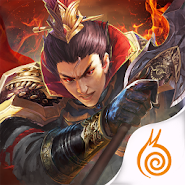 Kingdom Warriors is an online RPG on Android, where you will become a great General and lead your army to victory in battle. In this game you will be taken to the three kingdoms era, where you can fight with different kingdoms, each of whom wants to rule the world. Choose which side you will fight and start the battle on the destroyed earth. Assemble your team of legendary heroes, each of which will have unique abilities and skills. Make your army invincible, taking on the service of archers, mages, alchemists, cavalry and other troops. Challenge players from all over the world and fight them in the arena.

Comments to Kingdom Warriors on Android