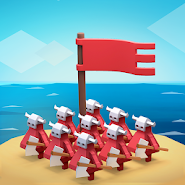 the Whole world went under water and stayed only a few Islands where there will always be a struggle for government resources and for survival. Nothing will be as before, everything changed, and especially people who do not care about others. Island War - a deliberate raids of the soldiers with many ships, then which is feasible only teamed with other players and coming together of different missions to win against sworn enemies. Create a powerful army and defend the island as if it were your last chance in life (and in this game all that way). Also, it is possible not only to defend its territory, but also to raiding other castles, where to get prey and bring it home.

Comments to Island War on Android