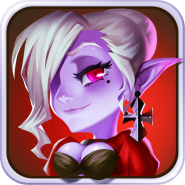 Infinite Heart – gather your invincible team of heroes and travel the huge world, fighting enemies. Form a team consisting of mythical creatures, brave heroes and warriors, each with unique skills and weapons. Join the fight with enemies and use abilities of all the characters, developing their strategy. Protect your world from destruction and defeat enemies. During the game replenish your team with new heroes and don't forget to enhance their abilities and acquire new weapons and uniforms. Challenge the strongest players from around the world and fight them in the arena, the winner getting prizes.

Comments to Infinite Heart on Android