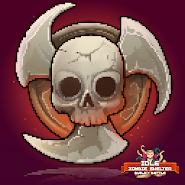 Idle Zombie Shelter: Build and Battle the zombie Apocalypse may never stop, it is important to remain calm and fight to the end, while protecting temporary shelter. Become the leader of one of such shelters, gather a team and go to the streets of his native city, to save the world. Destroy the spirits of the dead, upgrade your bunker, upgrade special abilities, unlock awesome weapons and explore all the cards. Sooner or later fight with the mutated bosses, collecting a huge army and thinks the best strategy for battle.

Comments to Idle Zombie Shelter: Build and Battle on Android