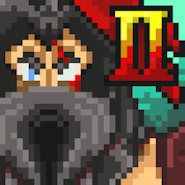 The Rise of the Gladiator 2 - The Empire can be captured by a group of the Ancients, but according to one of the prophecies, this can be avoided thanks to the Great Champion or as he is also called the Chosen One. Since it turned out that he was missing, people began to hope for a Second savior, which is also mentioned in history. Test your own strength and find out if you will really be able to become the hero, or if it is fiction and someone else will become him. Win numerous arena battles and expand the acceptable class system by using new spells.

Comments to Gladiator Rising 2 on Android