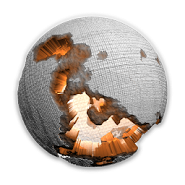 Galimulator – a game for Android where you will discover a world of politics and the endless battles taking place in a huge galaxy. In this game you will control a huge Empire that wants to seize power in the galaxy and subjugate the many space-faring States. Build a huge fleet, and devise evil plans and join alliances with other players to defeat the terrible monsters that had come from other planets. Explore new technologies come exciting quests and unlock new planets. Build new ships and send them into battle with the enemies of the Empire.

Comments to Galimulator on Android