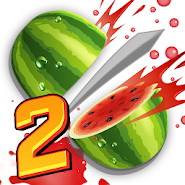 Fruit Ninja is the famous arcade game which sold around the world more than a billion copies. Mechanics of Fruit Ninja is extremely simple, your goal by means of different cutting objects, swords, knives, axes, cut into pieces flying at you fruits and vegetables, while visual performance and animations are so bright that away from the game is simply impossible. And here the creators of this little masterpiece decided to make us a sequel titled Fruit Ninja 2 - Fun Action Games in General is still the same classic Fruit Ninja, the new game has received a full multiplayer mode where you can compete with other players.

Cache for Fruit Ninja 2: unzip the folder to /Android/obb/
- path will look like this: /Android/obb/com.halfbrick.fruitninjax/
- install apk, launch the game!

17.12.2019 - Added a pause button to single player modes!
- Improved 'contact us' in the settings menu. Now has an FAQ and maintains a chat with customer support instead of opening an email.
- Updated some of our tech
- Some powerup balance changes! Join our Discord server to see!
- Bug fixes

Comments to Fruit Ninja 2 on Android