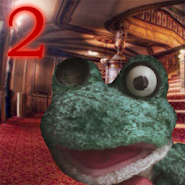 Five Nights with Froggy 2 horror game for Android where you will play the role of a night watchman. In this game you are transported into the recent past of 2007 where, after the reconstruction of the Palace Fromgold must once again make new visitors. For three years the great Palace of the king Fromgold empty after terrible destruction. The authorities decided to repair the Palace and make it the theatre. After extensive renovation, the Palace has regained a new life. For the protection of the Palace needed a night watchman, whose role you will play. Survive five or more nights at the Palace and reveal all its secrets.

Similar on Five Nights with Froggy 2

Comments to Five Nights with Froggy 2 on Android