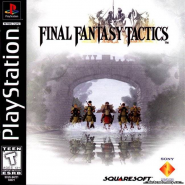 FINAL FANTASY TACTICS - Aristocrats can very often amaze with their zeal for power and wealth, so it is dangerous for even one of these people to be on their way. Move between forests, castles, deserts, abandoned ruins and other locations to fight against monsters in each of the available places and object to the new rules, as well as their dictators. Manage many fighters with special abilities, knights, and even magicians to have advantages in battles both when attacking and defending against enemy attacks.