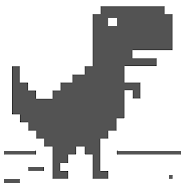 Dino T-Rex is a legendary game that has been played by a large number of people! Avoid any collisions with obstacles on your way in the role of an ancient dinosaur, so as not to accidentally crash into them and die. The longer you play and the further you have progressed, the faster your character becomes, thereby increasing the complexity at times. Get precious points, be prepared for unexpected changes of day and night, and dodge all kinds of attacks from opponents. Learn to cope with all the events and move on.

Comments to Dino T-Rex on Android