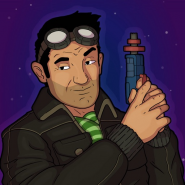 Dexter Stardust - The locals of Planet X, the Vrisians, have sent a special fleet of robots to destroy all life on planet Earth. Dexter Stardust is one of those who miraculously managed to survive, so 20 years later he receives a letter saying that he is the key to saving humanity and the Vrisians. There are only 5 episodes developed in the game, but each of them has its own atmosphere, missions, events and characters that add up to one picture. Find out what secrets the Robot from Planet X keeps, and what needs to be done to stop evil.

Comments to Dexter Stardust on iOS