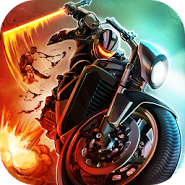 Death Moto is a pretty famous series of action of the runner in a mystical style, the first two parts of which were released by the Studio developer ICLOUDZONE GAMES , the third part developed by the young team WEDO1.COM GAME . Overall the story remained unchanged, you, as risen from the grave ruthless racer sat behind the wheel a hell of a bike sent to avenge something about this story is silent. But as hobnob the plot for games of this genre is not the most important, the emphasis is placed on good stylized graphics and gameplay. Driving a hero and rushing at breakneck speed through the city streets using various weapons destroy all who gets in the way. In comparison with the previous parts trikvel received additional tasks and missions, a wider choice of bikes and homicidal pieces, as well as the possibility of upgrading motorcycles. While maintaining a dynamic gameplay and a dark atmosphere.

Comments to Death Moto 3 on Android