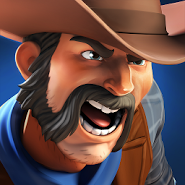 To sum up all that can be said about the game Compass Point: West, you can say that this action in the setting of the Wild West. However, if you delve into the details, all is not so simple. The developer of this project was the Studio Next Games Oy the famous zombie game The Walking Dead No Man's Land. In Compass Point: West, the guys decided to use a variety of creative solutions and moves. And so, before us is a desolate piece of land where you have to build a thriving city, develop it and protect it. So we face urban development strategy. However, for defense you need a squad of brave soldiers, to gain which can be from the collection of cards. So before us is a collectible card game? Battles will take place on a city street, in an isometric view, in a decidedly arcade-style. So all the same action arcade game? Apparently yet to decide which genre fits the game, each player independently.