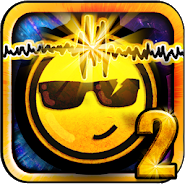 Beat Hazard - the continuation of a great space shooter on Android, using the musical compositions to random generation of levels, which will react to each song. New games are also added randomly generated ships and bosses, resulting from your choice of music. Every track in the game has its own tone and rhythm that affect the course of the game. Beat Hazard 2 improves and glows to the limit killer from killing enemies on your own music. Upgrade your ship and watched as the music increases its firepower. Upgrade to the max your weapon skills and ask the enemies heat. In addition to their own songs loaded on your device, you can now play any music from various streaming services: Spotify, Amazon Music and other services.

Comments to Beat Hazard 2 on Android