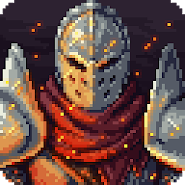 Battle Souls - pixel role-playing game which the unfolding events in a certain world in which for obvious reasons appeared in the sky, mysterious moon and gradually the world began to sink into the darkness. The residents had no choice as only to leave their homes and try to find shelter elsewhere. However, during the trip, our heroes pursued unhappiness. And then the group of the best warriors decided to go their own way and try to answer the main questions. Gameplay Battle Souls is a combination of RPG mechanic that goes well with the overall flow of the game.

Comments to Battle Souls on Android