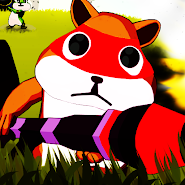 Battle Hamsters: Line defense - Get ready for intense battles where armed hamsters will mercilessly kill each other! Assemble a combat squad of several hamsters, provide them with strong weapons to use during battles, think about exactly how they will attack opponents and defend themselves in case of retaliatory strikes. You have the opportunity to always replenish the brigade with new types of hamsters, since the enemy forces can be much larger, and then you will even more have to figure out how to win in the current situation.