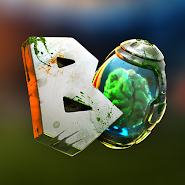 Baneball is a game similar to Rugby, where there are 2 teams and have to move the ball outside the enemy. You don't just play the sport, but will plunge into the atmosphere of the Apocalypse. A lot of monsters was released and began to mutate from people around the world were one. They have somehow to have fun, hence a revolution. Carefully consider actions during rounds and conquer, because you are waiting for new opponents with individual skills of strength, speed or size.

Comments to Baneball on Android