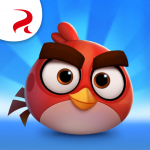 As you may have guessed by the title, Angry Birds Casual is an easy to learn game with a flock of birds from Rovio. In the game instead of trying to make bacon from bad piggies, the birds race to rescue the young and ultimately to reunite the fireflies with their soul mates. You can play hundreds of levels, collecting coins and exchanging of different awards, and their great variety of game. Even the most inexperienced player in Angry Birds need to master the game.

free gamesgames not from the play market