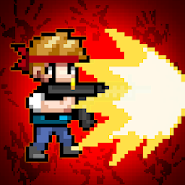 100 DAYS - Zombie Survival - downhole zombie shooter with elements of touch arcade and tower defense. The gameplay is simple enough in the beginning of the game you are against hordes of zombies alone with a minimal set of weapons and equipment your task is to delay the attacking undead as long as possible while collecting coins and prizes. As you accumulate funds, you will be able to build the building, hire new soldiers, buy weapons, defenses, develop new skills, and more. Ultimately, your task is to survive as long as possible and destroy the maximum number of eaters of brains.
the Game has a simple, but extremely addictive gameplay, an extensive system of development and great pixel graphics.