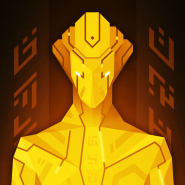 Hyperforma – hardcore cyberpunk game where you will explore an ancient network. The civilization of the past has disappeared, leaving behind deserted cities and ancient network. Many years later, unknown to explore decided to go on an unforgettable journey and immerse yourself in the cold depths of the abyss. Travel the vast expanses of cyberprotest and complete exciting missions. Immerse yourself in the network of the past and uncover all the secrets of a lost civilization. Keep a dialogue with the Titanic interfaces and break them. The game will delight you with original visual style of the game, which was taken from the works of William Gibson, Dan Simmons and Peter watts.

Comments to Hyperforma on iOS