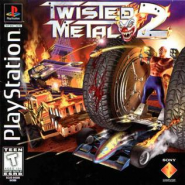 Twisted Metal 2 World Tour - calisto is once again holding a deadly tournament of drivers gathered from all over the world to completely destroy Paris, the shores of the Amazon, Moscow, New York, Antarctica, Holland, Hong Kong, as well as Los Angeles, which barely survived from the last time. Visit 8 different tracks, choosing one of 13 combat vehicles to destroy your own rivals. A special arsenal of weapons is scattered along the tracks, but in addition, each of the players has their own. If you don't want to act alone, then team up with one of the players and go to the end together!