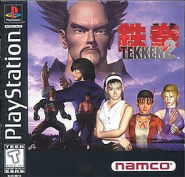 Tekken 2 - The Tekken World Martial Arts Tournament is almost over, and the main prize in the form of money will remain to the one who manages to defeat the last candidate to win — Heihachi Mishima! During the battles, something went wrong, and therefore the candidate changed to Kazuya, Heihachi's son. Everyone knows, but it was the father who threw his own son off a cliff, and he did the same to him as a sign of revenge. Exactly one year after the incident, the clan gained enormous power and strength, becoming the most powerful in the world. Go to a new tournament that they are holding, where the main prize will be 1000 times higher than the previous one.

Comments to Tekken 2 on PS