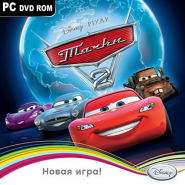 The locals of Radiator Springs will not put up with any strange actions, such as performing classified tasks on foreign territory by British spy Finn Mcmistle. Lightning McQueen, along with his friends the Master and others, go to the competition of the fastest cars in the world, thanks to which they will visit Tokyo, Paris, Italy and London. The main character becomes a four-time champion of the "Piston Cup", but now he has to deal with Miles Cardanval.

Comments to ТАЧКИ 2 on PSP