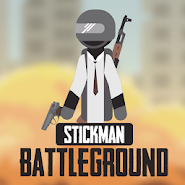 Battle Royale - mega popular multiplayer shooter which got a huge army of fans. Not inferior to the polarity of this game and a character like Stickman. And that Studio Stickman Mobile Games decided to combine it all in one project called Stickman Battle Royale. And so, the mechanics are completely original copies in a battle Royale, only with the difference that all events are unfolding in a two-dimensional world, and you have to play the role of a person from the sticks.