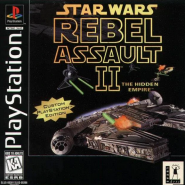 Star Wars: Rebel Assault II: The Hidden Empire - From one of the regions of the galaxy where spaceships were constantly disappearing, not far from it, a patrol from a cargo ship received a signal signifying urgent help. Protect your territory from possible Empire attacks by learning how to control laser weapons so as to destroy any enemy. The whole plot is based on certain scenes, but sometimes there are cases when options are shown as a choice to determine the future. Get to know the characters you will meet on your way, and also help them survive.