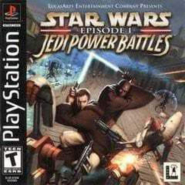 Star Wars: Episode I: Jedi Power Battles - Characters and all events from the legendary and very popular movie"Star Wars - Episode One: Hidden threat" move into a game where the battle with the enemy armies depends on you! Use your most important weapon — a lightsaber and force. The Trade Federation has declared a blockade for the planet Naboo, and believe me, this can cause a big stir in the galaxy, as a result of which the Galactic Republic will completely disintegrate. This major mistake must be corrected by the knights before the civil war begins!