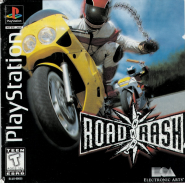 Road Rash - Get to know motorcycles better by interacting with them directly! The more time you learn to ride, the closer you are to becoming a professional biker capable of defeating any opponent in the race. During the races, each of the players has a chance to use various weapons, such as clubs or chains, thus pushing their own enemies away and improving their position in the ranking. Win races, get achievements, buy new motorcycles and conquer new peaks.

Comments to Road Rash on PS