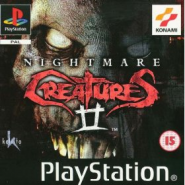 Nightmare Creatures II - Adam Crowley became famous for conducting spectacular experiments throughout 1934 in the vicinity of London, where he located his own laboratory and built a special shelter. Wallace became one of the victims of the crazy doctor, but he does not like this fate, so he decides to escape. The main creation of the scientist were zombies, mutants and the walking dead, they became his new army and attacked in case of threat or escape attempts by prisoners. Go through a total of nine locations filled with horror, and reach the end by getting out.