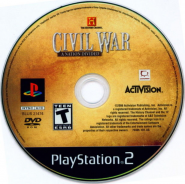 The History Channel's Civil War: A Nation Divided is a dynamic first-person shooter. 1861-1865, the period when the United States was torn apart by the Civil War, the South and the North clashed in fierce battles. You will be an ordinary soldier and you will have to perform the combat tasks of your command. The developers tried to create the most realistic world of that time, the game has a lot of documentary videos revealing the history of that period. There are only twelve missions in the game: for the North 5, for the South 6 and the final battle. But whatever you do, the North will inevitably win.

Comments to MobyGames The History Channel: Civil War - A Nation Divided on PS