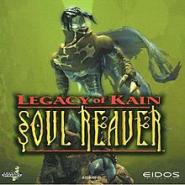 A lot has changed on the land of Nosgot after thousands of years, but one of the main features was that Cain became the real king of vampires and began to rule everything in his own throne room. He is assisted daily by 6 lieutenants, in the course of their work they have changed both their appearance and received superpowers. For the betrayal of the first lieutenant, his wings were torn off and banished to the bottomless abyss, where Elder, the god of the abyss of time, found him. He trusted the exile and saved him, for which he had to pay him with reprisals against the current government.

Comments to Legacy of Kain: Soul Reaver on PS