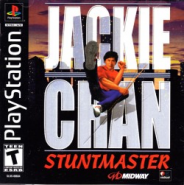 Jackie Chan Stuntmaster - Jackie Chan's grandfather was kidnapped, and according to the storyline, he will have to go through 15 different levels with you on the streets of New York! Learn the true secrets of martial arts from the legendary actor, put them into practice, and then just watch as crowds of opponents lose consciousness from a large number of combos and acrobatic movements of the protagonist. The peculiarity of everything is that your character is voiced directly by the voice of Jackie Chan, so the atmosphere will be even more interesting and exciting than without voice acting.