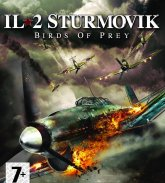 One of the best flight simulation where you play a pilot of a military aircraft during the Second World war. The days of the Second World war fully revealed the tremendous potential of military aviation. Was sozdati thousands of aircraft, from fast and agile fighters to huge and heavy bombers. In the game you are provided a huge selection of equipment, both from the USSR and Germany. Fly to multiple tasks, shoot down enemy planes and do bombing ground vehicles. Participate in the decisive battles that turned the tide of the war!