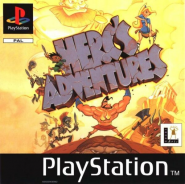 Herc's Adventures - fertile lands, rich wine, unusual women. All of the above exists in one place, so called paradise on earth, namely in Greece. The country is thriving thanks to Persephone, but one day she is kidnapped by the bloodthirsty Hades, and now Zeus is wondering which of the brave warriors to choose for the release of the unfortunate. Perform the feats of Hercules in the role of Hercules, pumping your own characters to the maximum level. You will find a large number of quests, interesting locations, humor and items to use.

Comments to Herc’s Adventures on PS