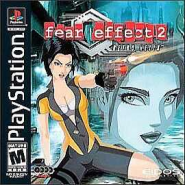 Fear Effect 2: Retro Helix - In 2048, Hong Kong, a number of laboratory experiments were carried out, as a result of which a new disease appeared. After that, disorder began in the world and the level of terrorism increased, so 4 different heroes appear to help, capable of changing the course of the fate of mankind. They need to think through a full-fledged plan to prevent the plague, as well as delay the infected cold-blooded killer. Navigate through Hong Kong, New York, Penglai Shan, Xi'an and other places to understand the whole story.