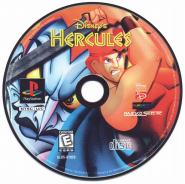 Disney's Hercules - You appeared in this world in the role of Hercules, who will have to prove all his life that he is worthy of being on Olympus. Start your own adventure in Ancient Greece, where you and the magical horse Pegasus will go to fight with the real darkness — Titans. After the past tests, the journey will not end there, because the Lord of Darkness kidnapped the beloved of the main character and hid her in the dungeon. Quickly perform a brave feat and become a real hero who will be remembered for a long time for everyone.

Comments to Disney's Hercules on PS