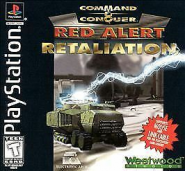 Command and Conquer: Red Alert - Retaliation - the story has completely changed, and now you can see for yourself. It is your choice that will affect the state of the world, so make important decisions carefully and complete the 34 missions set for yourself. The Second World War has not yet begun, since Hitler did not come to power, but the Soviet Empire did not stop at the almost complete seizure of Europe, and now it intends to seize the entire planet. Diversify your own life by joining the ranks of Allies specially assembled to destroy a potential threat.

Comments to Command and Conquer: Red Alert - Retaliation on PS