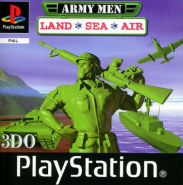 Army Men: World War: Land, Sea, Air - In any war there is only one side-the winner, and the other is defeated. Even among the plastic soldiers, there may be commotion, gradually developing into a real war. At one point, this happened, so your character with one rifle and some knowledge will have to face tasks where there will be no time to talk about the consequences. Infiltrate radar stations, protecting the territory and capturing both the sky and the land with the sea. After a while, your arsenal of weapons will be significantly replenished.