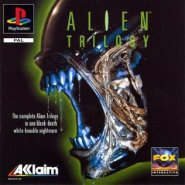 Alien Trilogy - With the arrival of the "aliens" on a planet where until that time there had never been anything unknown to humanity, a real nightmare began and fear continued to grow. Collect special energy sources to get a unique power, thanks to which you will be able to learn even more secrets about new aliens. In total, these creatures come in six different species, but they are created and raised by only one queen queen. Go to the rescue and become the hero Lieutenant Ripley, who managed to stop the prosperity of evil.

Comments to Alien Trilogy on PS